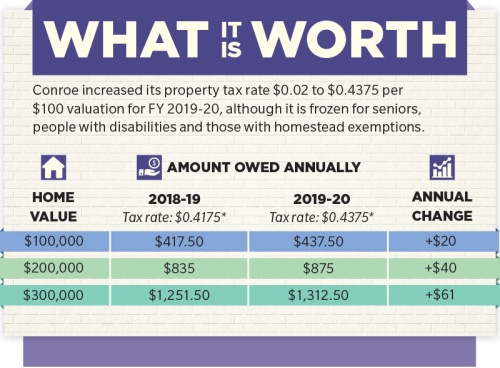 Senate Bill 2, a property tax reform bill signed by the governor in June, limits the annual growth rate of cities’ and counties’ maintenance and operations revenue to a maximum increase of 3.5% from the previous year—unless voters approve a higher rate.

City officials said the increase will bring an extra $2.3 million to Conroe—critical to staff salary needs.

“A lot of cities are proposing going up to the max this year because you’re going to be capped next year,” Conroe Chief Financial Officer Steve Williams said. “In the Austin area, in the [Dallas] metroplex—I’ve just seen a lot.”

Officials said the result will be a $61 annual increase in property taxes paid on a $300,000 home starting
Oct. 1, the beginning of Conroe’s new fiscal year. However, the property tax rate is frozen for people who are over age 65, who are disabled or who have homestead exemptions.

Aside from property taxes, sales tax revenue is Conroe’s other major funding source, but those revenues dropped in FY 2018-19, with sales tax generating $102,000 less than in FY 2017-18. At the Aug. 19 public hearing, Conroe City Administrator Paul Virgadamo said Conroe is a sales tax-driven city, and staff is concerned about the decline over the past six months.

“There are houses coming on the ground, but until we get a lot more on the ground, you can’t depend on the capital side of things at the $0.4175 [2018-19 property tax rate],” Virgadamo said. “We [also] need to be prepared for the 3.5% rollback next year. We don’t know what that’s going to do to us from a revenue standpoint, or even the ability to even think about raising the tax rate next year.”

Mayor Toby Powell said the council must do what is best for residents.

“It’s not just on a whim and a thought. … I hate it, I really do, that the time has come. … Now our hands are tied,” Powell said. “I think not only us but councils before us have done a tremendous job in keeping our tax rates low for all these years—and still today, even with a $0.02 tax raise, we’re lower than any other city our size.”

The property tax rate increase comes after a citywide compensation study by Evergreen Solutions and the city of Conroe that found most departments, including fire and police, were underpaid compared to other nearby, similarly sized cities, officials said. The discrepancy between pay rates compared to other similarly sized cities creates challenges for recruiting and retaining talent, officials said.

Conroe Finance Manager Denise Morrison said that $3.9 million to address the staff’s compensation, recommended by the study, was included in the operating budget approved Aug. 28. It gives raises to existing employees and formalizes an employee pay grade plan.

According to the salary study, surveyors looked at comparable cities and counties—such as Harris County and the cities of Allen, Frisco and Huntsville—to determine market average salaries for specific positions. The study found that salaries as a whole in the city of Conroe are on average 6.7% below the market average.

“There are increased services we need, and we cannot say we want to do them if we’re not willing to do what is right,” Council Member Raymond McDonald said Aug. 28. “Other cities recently that are in the $0.70 [rates] went up $0.04 just to keep up. We keep it very low around here.”

Conroe Assistant Director of Finance Collin Booth said he believes the tax rate increase also benefits the city’s reserves. Without the rate bump, Conroe’s 90-day reserves could slide below $1 million within the year.

“That’s not good to operate your budget in a deficit position like [that],” Booth said. “We’ve never been like this before since I’ve been here, and we’re certainly not recommending it. Under the current [property] tax rate of $0.4175, it gets pretty bad pretty quick.”

Dylan Casper, a firefighter with the city of Conroe and a volunteer for Cy-Fair’s fire department, said he supports the proposed tax rate increase. Casper said he owns a house in a lakeside subdivision in Conroe.

“That’s a very small investment as you look at the monthly numbers to ensure our city can keep up with the rapid growth—being the fastest-growing city in America two years ago—as well as help fund city services and public safety,” he said.

However, resident John Nicks spoke during the citizen inquiry Aug. 28 to reject the budget and property tax rate increases, citing costly city projects including the city’s park and ride program, a commuter route to downtown Houston that opened April 1.

“You don’t realize the pain and suffering of the high property taxes. It’s not just me,” Nicks said. “There’s way too much waste in [the budget] the city could trim that the city is wasting my tax dollars on.”