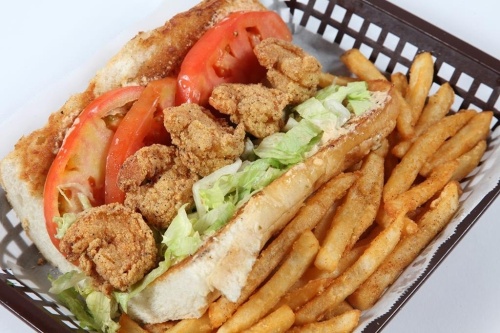 In 2004, Tre Thomas fulfilled his dream of serving up fresh, tasty seafood to the masses by way of Catfish Station, a food truck he operated out of a 14-foot trailer. In an era when Long John Silver's was the sole competitor, the made-to-order seafood, homemade batter, and signature sauces made his food an instant hit. Seven years later, Catfish Station opened its first brick and mortar location, a drive-thru-only location in a small, bright orange building formerly used as a coffee shop. Customers craved the flavorful combinations and lined the streets daily, so Thomas took the opportunity to franchise. From 2017 to 2019, Catfish Station grew to 14 locations across Houston and the surrounding areas. However, Thomas soon realized his quality recipes and stout company values were not immune to the growing pains of the franchising model. Ultimately, he made the decision to pull back, rebrand, and start fresh—thus beginning his new journey as the owner and founder of The Station Seafood Co. All of the customer favorites from Catfish Station are the same at The Station Seafood Co.—located at 8604 Hwy. 6 N., Houston—but now, Thomas prioritizes quality over quantity. He can now ensure that each of the famous recipes are executed perfectly, each customer receives a smile with their order, and franchising can happen the right way the next time around. “This is a genuine passion of mine,” Thomas said. “I really truly care about the quality of food that everybody gets when they walk out of here.” A former University of Texas football player who went on to play for the Detroit Lions, the Jacksonville Jaguars and the New York Giants, Thomas said creating a seafood restaurant was simply a part of his ethos.

“I always felt like my natural state is when I’m entertaining and cooking and socializing,” Thomas said. “I can remember really learning how to cook from my dad.” Thomas described his recipes as “a bunch of scribbling on blank pieces of paper until I get it right.” The Station Seafood Co.’s homemade batter is made with flour, ultra-fine cornmeal and an original blend of spices and seasonings that took years to develop. Additionally, a strict oil filtering policy produces a light, crispy texture lacking any oily residue. Patrons also love The Station’s lineup of signature sauces, including The Original Catfish Station Tartar Sauce, creole remoulade and homemade cocktail sauce. All of them are made from scratch, but Thomas emphasized the widespread love for the tartar sauce. It has been around for 14 years and is unlike any other on the market, made with a sweet relish, a little heat, and other secret ingredients. “You’re genuinely getting some food that somebody put some effort into,” Thomas said. “The passion and the love, you can taste it from the time you walk in and see the atmosphere and interact with my staff. And then, we literally made this to order just for that person.” In addition to the seafood, Thomas said the wings are a menu standout—so much so that a sister wing company called The Station Wing Co. delivers them across the region. With flavors like Creole Candy, Dr Pepper Glaze, Mango Habanero and Carolina Gold BBQ, customers cannot get anything quite like them anywhere else. “I think we have some of the best wings in Houston,” Thomas said. “That’s a little known fact, we move a lot of wings out of here.” Other offerings include po-boys, gumbos, grits, boudin, pastas, salads and tacos. The Station Seafood Co. is also one of the only spots in the area where customers can sip on a liquor-based daiquiri with their meal, or take it to-go. The colorful alcoholic drinks come in sizes ranging from 20 ounces to a gallon. And finally, a meal at The Station Seafood Co. is not complete without an order of the authentic fried bread pudding beignets. Infused with the choice of peaches or chocolate—and sometimes strawberry—the deep fryer makes the dessert crispy on the outside and moist on the inside. Caramel and powdered sugar take the role of the cherry-on-top. Each recipe was created with care, attention to detail, and a deep love for Cajun food. Thomas also aims for each person who comes to the restaurant to have a wonderful experience, which is why he made a playlist of 600 old school, funk and R&B songs to play on a constant loop. The playlist is available on Spotify and is titled “FISH FOOD” by Tre Thomas. Visit The Station Seafood Co. to dine in at 8604 Hwy. 6 N., Houston, or call to place orders at 832-427-6042. Thomas also encourages patrons who dine at The Station Seafood Co. to leave a review here. Learn more about Thomas and the story behind The Station Seafood Co. by visiting https://ilovethestation.com/. The above story was produced by Community Impact's Storytelling team with information solely provided by the local business as part of their "sponsored content" purchase through our advertising team. Our integrity promise to our readers is to clearly identify all CI Storytelling posts so they are separate from the content decided upon, researched and written by our journalism department.