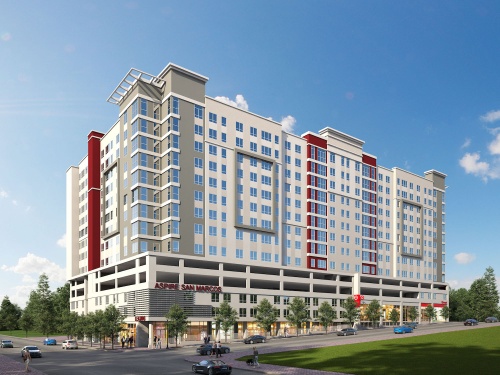 The project is planned to include 585 bedrooms in 310 units, as well as retail and office space. Renderings are subject to change.

Show map
First proposed in 2008 as a three-story building, Concho Commons is now expected to be constructed as a 13-story building in San Marcos by 2020.

On the northern edge of downtown San Marcos, Concho Commons will be a multiuse development on approximately 1.46 acres, just a block from Texas State University's campus.

Along with retail space, offices and a parking garage, a total of 585 bedrooms will make up the 310-unit building complex. The project also includes plans for a higher-quality water system, a state-of-the-art fire protection system and street beautification. Concho Commons' front facade will face north toward the university along Concho Street, while the rear facade will face downtown, according to San Marcos Director of Communications Kristy Stark.

When first proposed in 2008, the development reflected San Marcos' shifting focus to grow within the downtown area, according to the 2008 Neighborhood Identity and Placemaking analysis, which at the time saw a boom in development along the I-35 corridor and less commerce and development downtown. The building project has grown by 10 stories in the past 10 years since it was first brought to the city.

Ed Theriot, a consultant working on the project, said units at Concho Commons will be available by-the-bedroom, which is often how student apartments are leased, and by-the-unit, which is generally more common in single-family developments. Two-thirds of the apartment units are expected to be one or two bedrooms.

Developers Casey Development Ltd., a San Antonio commercial real estate company, recently began construction of Concho Commons at the vacant plot between North LBJ Drive and North Guadalupe Street. It will be among San Marcos' tallest buildings once the project is complete in 2020.