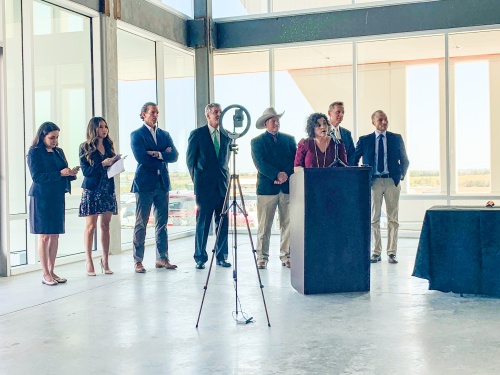 An economic incentive agreement between the city of Kyle and SmileDirectClub’s Access Dental Lab will bring 850 jobs to the city of Kyle via the Hays Logistics Center, an industrial development near I-35.

The agreement was formally approved at a special City Council meeting held at the facility Oct. 8.

“It’s very competitive,” said Diana Torres, direct of economic development for the city of Kyle. “For us to be able to win this project is a big feather in our hat and says a lot for our region. We’re in the innovation corridor, and they’re a high-tech biomedical manufacturing company.”

In exchange for job creation and a capital investment of about $37 million, the incentive agreement stipulates that the company will receive a 50% rebate on real and property taxes over the next eight years, Torres said. The estimated value of the incentive, according to Torres, is about $659,799, while the estimated net benefit to the city is about $5,234,235.

The performance-based agreement mandates the company create 439 jobs the first year, 643 total the second year and 850 total the third. Those jobs must meet a minimum pay requirement of about $40,000, according to Torres, and will make the company the largest private employer in the city.

Kyle Mayor Travis Mitchell, speaking at the event, said that attracting SmileDirectClub was a team effort that took years of strategic planning.

“We have had a vision for a very long time to create a city and build a city that allows for our residents to live and work and play, “ Mitchell said. “To us, that is far more than just an overused phrase—it means something very dear to us.”

This story is still developing and may be updated.

Katharine Jose has written about politics, infrastructure, environment, development, natural disasters and other subjects for The New York Observer, Capital New York, and The New York Times, among other publications. She was an editor for several publicat